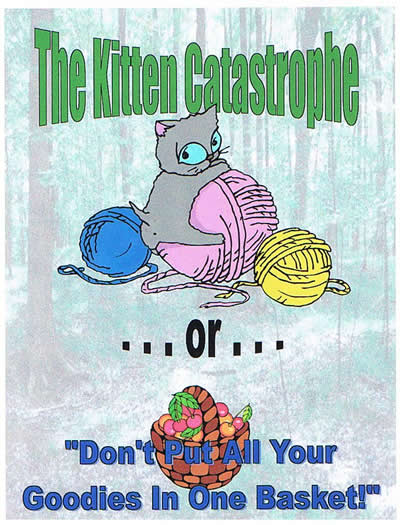 Once upon a time, there was a beautiful young damsel named Penelope Precious who lived all alone with her baby kitten Floofy.

One dark and scary day, as Penelope sorted through her mail, she came across something dreadful. It was a letter from Floofy. "Help!" read the letter, "Lost in woods! Please bring food!"

This was a calamitous happening indeed. Penelope had to do something. So, she packed up a basket of goodies and courageously skipped to the woods.

Penelope looked high and low, around this tree and that tree. "Where could he be?" poor Penelope wondered. "I must find my kitten!"

The deeper Penelope searched into the woods, the scarier they became. At one point, she was even chased by a bear!

Just as Penelope had almost given up hope, she looked in the distance and there was her beloved kitten! "I found you!" exclaimed Penelope.

But just before Penelope could pick him up, out from behind the tree popped the mischievous Dr. Dreadful!

"Hee hee hee!" the old doctor snickered, "You have fallen for my little scheme. It was I who wrote the letter! This cat can't even hold a pencil! Now hand over that basket of goodies or you will not see your precious kitten ever again!"

"Very well," sneered Dr. Dreadful, "Then I will tie you up!" And without another word, the roguish doctor wrapped a thick rope around Penelope Precious.

It seemed as if there were no hope for the distressed damsel. But Penelope didn't give up. "Run!" she shouted to Floofy, "Find someone to rescue me!" And Floofy bounded away and escaped the woods in search of help.

As soon as Nicolas Niceguy learned of the imminent danger about to befall Penelope Precious, he scooped Floofy into his arms and raced to the woods to rescue her.

Floofy could not remember the way back, so together they searched high and low, around this tree and that tree. At one point, they were even chased by a bear!

Just as Floofy was about to give up all hope of finding his beloved master, the dynamic duo saw a golden brown horse in the distance. It was a nice horse, but even more significant was the woman sitting atop its back. Why it was none other than Penelope Precious tied head to toe and in much distress!

"Meow" cried Floofy as the two raced to her side.

But just before reaching the damsel, the naughty Dr. Dreadful appeared and stopped them in their tracks. "Where do you think you're going?" scorned the ill-behaved doctor.

"I'm trying to save that poor, defenseless damsel in distress!" exclaimed Nicolas Niceguy.

"Oh no you don't!" Dr. Dreadful replied. "I tricked her fair and square. You just run along and mind your own business!"

Nicolas and Floofy could tell that Dr. Dreadful was up to no good. "Can't we talk this over like civilized folk?"

"No!" said the doctor. And with that he punched the valiant man square in the face. "You have meddled in my affair long enough, I say!"

Then Dr. Dreadful, who incidentally is not even a real doctor, grabbed Nicolas by the throat. "Now, you will wish you had never chosen the path of bravery and kindness. No more Mr. Niceguy! Ha! Ha! Ha!

But Nicolas did not give up. He gathered all of his strength and gave Dr. Dreadful a walloping punch in the jaw.

The underhanded doctor, realizing he was outmatched in strength pulled out a powerful weapon. "You're no match for me now!" laughed Dr. Dreadful. "You might as well give up!"

"Never!" shouted Nicolas Niceguy. And with a swift kick, he whacked the weapon high into the air and snatched it away from the villainous doctor. "Who's giving up now?" asked Nicolas. It was a rhetorical question.

"I am!" sobbed the defeated doctor as he dropped to his knees in surrender.

"You're welcome," said Nicolas. After stepping down from his box, he turned to the now-not-so-dreadful Dr. Dreadful. "And as for you," he bravely asserted, "I know just the place for your type."

"Nope! You're going straight to jail!"

"Will you marry me?" Nicolas asked between slurps of root beer.

Three days later, they were married and went on to live happily ever after.